Tripping Kosher visited our facility to watch us making our fine kosher meats. Watch the video on their site. 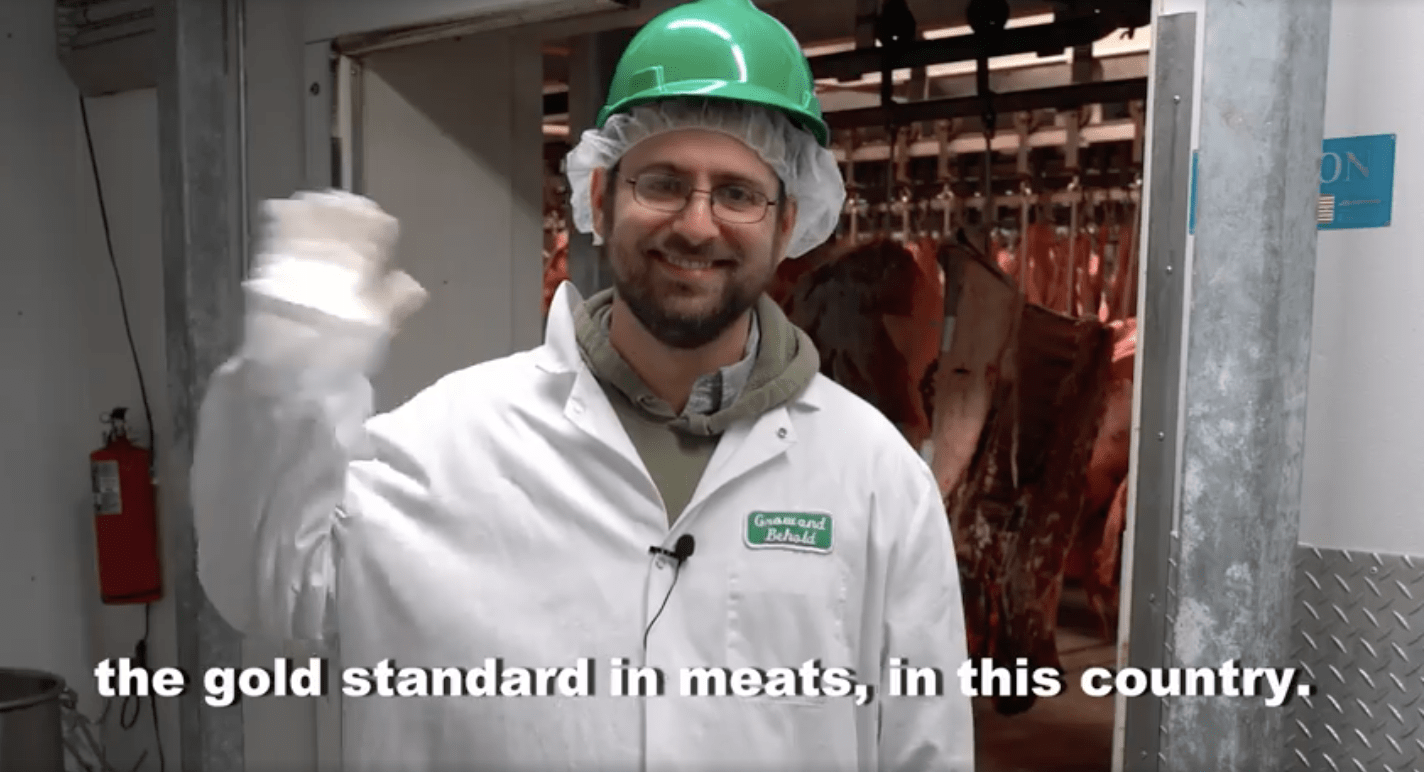 Naf joined Mark Oppenheimer on December 12, 2013 for an episode of Tablet Magazine's Unorthodox.

Naf and Anna were featured on the November 13, 2018 Episode of Let My People Eat, speaking with Jill Sharfman and Dr. Andrea Moskowitz about eating healthy and keeping kosher.

We are humbled and grateful for the positive reception of our products and business practices. Here's some of what has gotten folks excited about Grow & Behold since we started to bring sustainable, ethical kosher meats to the table.

Covering the launch of Grow & Behold in 2010, Leah Koenig wrote in The Forward, "The efforts that Hanau has taken to personally master every part of the production process is what arguably sets apart Grow and Behold from similar initiatives. "I love to feed people, and see potential good to do in what I feel is a broken system," he said. "Compared to the big companies, I'm still a novice, but I am learning this business from the ground up."

"For those looking for ultimate flavor and texture, the price is well worth it," writes Rachel Wizenfeld. "While Hanau admits that it's often hard for customers to get over the initial price hurdle, once people try his meat, they're hooked. Hanau says, "We founded Grow and Behold Foods because we wanted the kosher community to have the same option of buying ethically and sustainably produced meat that exists in the non-kosher world."

In 2012, we reflected with Amy Spiro of the Jewish Week on the next steps for our business. We had begun providing meats to Eden Village Camp, Isabella Freedman Jewish Retreat Center, various Hillels and the now-closed Pardes Restaurant. But we had not, as of yet, started selling red meat. "We have a producer that has cattle almost ready for us, and we're working on securing the right physical infrastructure: a slaughterhouse with the right humane equipment."

We talked to Rivka Oppenheim about what happens when your DIY ethos suddenly means you're starting a company."I figured, 'All right, I'm going to have a farm, I'm going to be around these animals, why should I be paying a shochet and flying him down when I should just do it myself? I just got deeper and deeper, and found myself learning the meat business from the ground up," Hanau said. "And the further I got into the meat business, the more Anna and I realized that maybe that was the place where we needed to be."

Kim LaChance Shandrow writes about how Grow & Behold has been responsible for shifting customer attitudes about what meats to purchase. It has also helped to shift some farmers into using more sustainable farming practices. "One farmer Grow and Behold contracts with, Anna recalls, was so thrilled to see his formerly cooped-up turkeys wandering around outside the barn, he could barely contain his enthusiasm. "He called us up and said, 'The turkeys are so happy, they're so cute!' He'd never seen them running so wild and free."

"The chickens were delicious, so the rest is history," said Phyllis Berman, a longtime customer and supporter, describing the expansion of Grow and Behold's pick-up locations in the Philadelphia Area.

It's not only kosher chefs who love to use Grow and Behold. James Beard Award-winning Chef Michael Solomonov has been a fan of our products since we opened. In this article, Joan Nathan beautifully tells Solomonov's story and explains Zahav's food choices. "Although Zahav is not kosher, Mr. Solomonov does not serve shellfish or pork, nor does he mix milk and meat on one plate. He does use Grow and Behold kosher pastured chicken. 'This is a high-end kosher chicken that is incredibly delicious,' he said as he offered a taste of chicken thighs that had been marinated in onion juice, lemon and garlic and grilled, with fingerling potatoes cooked in chicken fat with the Middle Eastern spice mix za'atar."

Want to reconnect with your Jewish roots? asks food-legend Joan Nathan. Try Chopped Liver. "We are producing an old-fashioned chicken for the modern world," said [Naftali Hanau]. "We are encouraging people to use all of the parts in the way our ancestors did. With every package of livers we sell we include instructions for koshering the liver and a recipe for traditional chopped liver." Read more about Joan's romp through Jewish Brooklyn.

Shifra & Shlomo Klein, of Btayavon and Jamie Geller's Joy of Kosher Magazine, had a terrific time learning about the Grow & Behold difference. "It was inspiring to hear Anna and Naftali share their story and give a tour of their backyard. We chatted over a BBQ feast they prepared, and the simple but truly mouthwatering food was an unexpected perk. We enjoyed Grow & Behold beef tartare (exceptional!), beef burgers, and marinated lamb chops with a salad of greens freshly picked that morning from the garden."

A girl, a boy, a field of dreams. We got our start growing organic vegetables...and the rest is history.

[Anna] spent a summer on a farm and realized not only that she loved it, but that she (city girl) too could be a farmer, and that farming met all her criteria for the perfect job and lifestyle: being healthy and strong, being outside and connected to the cycles of seasons and growing things, and making the world a better place by helping to change the face of the American food system," wrote the Mother Nature Network when it named Anna one of the Top 40 Farmers Under 40.

Anna & Naf have both made The Jewish Week's lists of "36 under 36." Did the reporters find us just a little out of the ordinary? Perhaps. "Anna Hanau is probably the only new mom in Brownstone Brooklyn who lists "tractor operation" and "on-farm slaughter" as skills on her resume," Julie Weiner wrote. About Naf, Amy Sara Clark added, "In addition to three children, the Hanaus have 17 chickens in their backyard, which, Naftali says, provide "eggs and entertainment."

Anna spoke to Gaby Dunn about starting a kosher meat business, organic farming, and caring for backyard chickens. "I say a little prayer," she smiles. "It doesn't matter the weather, I have to go outside and take care of something that's not me. Whatever I'm stressed out about, it doesn't matter. They're pretty much worried with three things," she gestures to a clan of chickens in the corner. "They want to eat, they want to scratch, and they want to poop."

The Jewish farming movement has spread to Jewish communities all over the country, as evidenced by Hazon's JOFEE fellowship and countless Jewish educational gardens and farms across the country. In a seminal piece that was also included in her book, Kosher Nation, Sue Fishkoff interviewed many of the early pioneers of the movement, including Naf & Anna when they were farming at Adamah. "Hanau and Stevenson are part of a small but growing number of young activists in the new Jewish food movement who are turning to the land as a way of expressing their Jewish values. They are not farmers who just happen to be Jews. They are Jewish farmers, working the land according to agricultural laws set down in the Talmud, teaching their peers and trying to promote the importance of growing one's own food within the greater Jewish community."